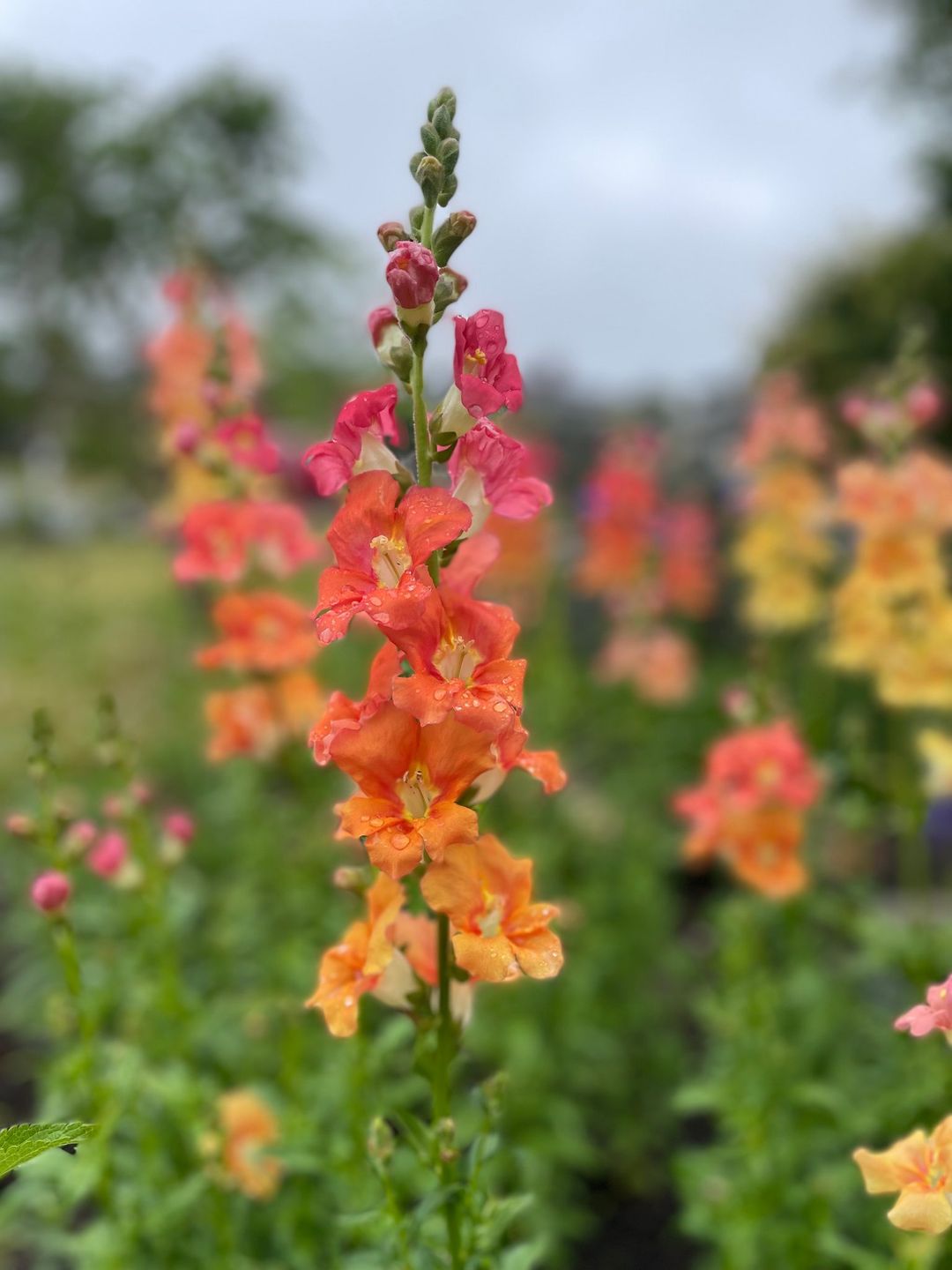 Remember squeezing a snapdragon when you were a child to make the jaw open and snap shut? I gave one to a little girl the other day and it appears the game is still very much alive. She even used a funny voice to make the flower talk. But did you ever dress a snapdragon? I've been struggling through some of the works of Gertrude Jekyll recently (sacrilege to say, no doubt, but was any garden writer ever so dull?), and in her Children and Gardens, I came across this very odd idea:

'It is amusing to dress up a Snapdragon seed-pod, when it is brown and dry, as an old woman. If you look at it you will see how curiously like a face it is, with large eyes and open mouth. You must break off the projecting spike so that it leaves a little turned-up snub nose. Then you get a cork and whittle away a bit at the top, and you send a pin through the pod and down into the cork. She must have a large mob cap with a frill round the face, a shawl, and a petticoat. Anyone who can dress dolls can make this. If you shake her she weeps little black tears'.

It's difficult to imagine anyone agreeing to sew clothes for a seed-pod nowadays. Then again, I do remember having a doll that had a dried apple for its head.

While traditional snapdragons will always be popular, particularly with children, for me the most beautiful of all is a very untraditional series called Chantilly. Chantilly Snapdragons are just divine, absolutely nothing like those stumpy snaps you buy from garden centres. I've had big clumps of them in the front garden this year (which otherwise is home only to a bed of lily of the valley and a desultory patch of lawn full of dandelions and an ever-advancing army of bindweed). I planted the snaps here primarily because they seem one of the very few reliably deer proof flowers. To my surprise, they have attracted a lot of non-deer attention. People passing by frequently stop to ask what they are. Unlike traditional snaps with the snout that children squeeze, these ruffled butterfly types are open faced and, to my eye, so much prettier. Traditional snapdragons rely mainly on bumblebees for pollination as they are exactly the right weight when they land on the lip to cause the mouth to open - honey bees aren't heavy enough - but the welcoming Chantilly snapdragon is open to all.

The series includes a variety of colours, and this year I grew 'Bronze', 'Light Salmon', 'Velvet' and 'Cream Yellow'. My preference was for the first two, and they go together beautifully.

The lowest flowers on 'Salmon' are a soft tangerine and they change colour as they move up, becoming dusky pink on top. 'Bronze' is darker, shifting from gold to orange to pink and red, a lovely combination.

'Velvet' is a rich reddish brown shade that I found too easily marred by rain or insect damage, and I probably will avoid it in future. What was supposed to be 'Cream Yellow' was a glow in the dark kind of yellow and I wondered if the seeds had been mixed up. It toned down a bit when I combined it with Madame Butterfly 'White' (an azalea flowered series of snaps I also like), which has a hint of almost exactly the same lemon yellow in its centre.

Chantilly snaps have tall - up to three foot - but strong stems that haven't needed to be staked in my garden (and we do get some quite strong winds off the sea at times). They also have a light but rather lovely citrusy scent. They are a group one short day snapdragon, so grow best in cooler weather. However, in temperate climates they can potentially keep growing until the autumn. Give them full sun or, in warmer climates, a bit of afternoon shade. They like a rich soil, and I feed mine with weak fish emulsion. If you want the long central stem, don't pinch, if you want side shoots immediately, pinch out. I do half and half as I quite like the bushier effect and this gives more stems more quickly for cutting. (Once the main stem has flowered, side shoots will develop anyway.) Cut them back to about 8" after the first set of blooms are over and they should start up again. They may even become a short-lived perennial. In warmer climates, try growing the luscious azalea flowered group 3 Madame Butterfly as well, to keep the snapdragon display going into the autumn.

Where to buy seeds

Given the amount of variation I've found between stems of the same variety, I suspect that growers are finding it difficult to keep them from crossing. It would be a shame to lose the individual colours, but increasingly I am seeing seed offered only in mixes, which is always a rather ominous sign.

In the US, Redemption seeds and Swallowtail still have a full range of individual colours, the latter also delivers worldwide.

In Canada, Stems Flower Farm offers a huge range of snapdragon seeds in the autumn, including many individual Chantilly colours.

In the UK, well, sorry, but at the time of writing even Chiltern Seeds is offering only 'Velvet'. Maybe that will change in the autumn. I can't find anywhere with a good collection of individual colours. Are the effects of Brexit even being seen in seed supply? Please let me know if you find a good UK source. In the meantime, you can always order from Swallowtail in the US.

Sow early, because Chantilly snaps, although some of the quickest to grow, still take 100 days to maturity. I sowed mine the second week of January and this year will start even earlier. Sprinkle seeds on top of moist seed compost and keep at around 18C; extra heat can inhibit germination. Don't cover them: snapdragons need light to germinate. Water only from the bottom. Once the seedlings emerge - about 2 weeks - keep under a grow light in cool temperatures, keep moist but not too wet, and grow on until they have a couple of sets of true leaves and then prick out. Grow on cool. They are slow developers so may appreciate a bit of weak fish emulsion before planting out. Transplant into the garden after the last hard frost.

Snapdragon as a cut flower

They make great cut flowers, lasting at least a week in the vase, but only if you harvest them early, when just a few of the bottom flowers are open. Once the insects start pollinating them, vase life is shorter. Leave them to hydrate in a bucket of cold water for a few hours and stand them upright. If they lean or are put on their sides they will curl at the top.