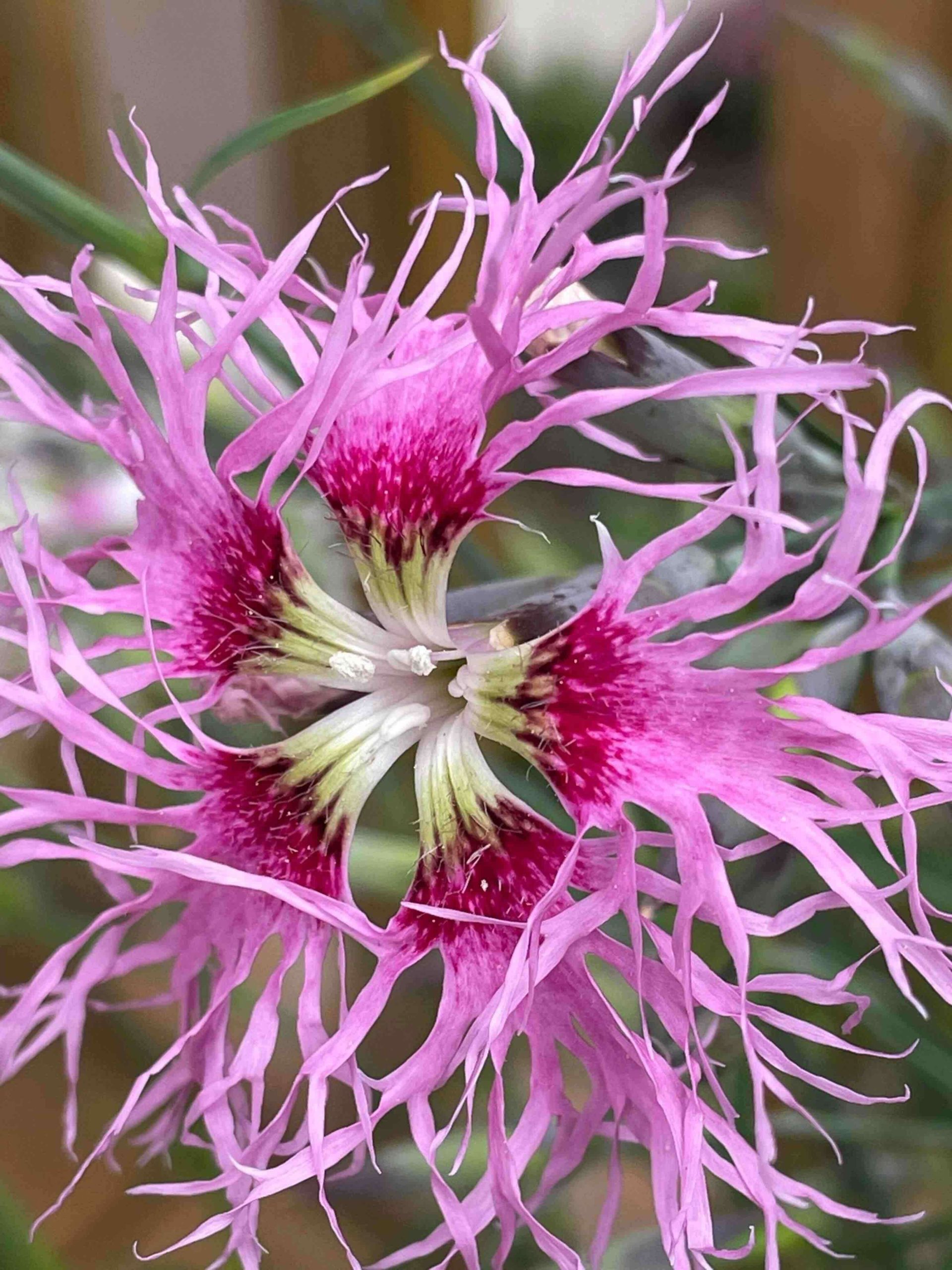 Dianthus: flower of the gods

Who can resist the gorgeous scent of dianthus? Theophrastus, father of modern botany, named it the flower of the gods and the seventeenth-century herbalist John Gerard praised its ability ‘to decke up gardens, the bosomes of the beautifull, garlands, and crownes for pleasure’. You’ve got to love a multi-tasking plant.

In the past I’ve grown such evocatively named early varieties as ‘Old Fringed White’, ‘Inchmery’, ‘Sops in Wine’ and the rather less romantic ‘Mrs Sinkins’, named for the nineteenth-century matron of Slough workhouse. But I admit I've grown these more for their powerful spicy fragrance than for their performance in the garden. They sprawl everywhere and are difficult in a mixed border: if ‘Mrs Sinkins’ flops on you, you’re finished.

And yet I find the much better behaved modern hybrids ungainly, even ugly. They’re squat or stiff or artificial in appearance. All too often you must scramble onto your knees and risk insect incidents by sticking your nose right into the flowers to catch a whiff of fragrance. Hope springs eternal, and I still buy them, but I'm almost invariably disappointed.

As for carnations, D. carophyllus, they’ve been rendered completely charmless as they’ve been hybridised for the cut flower trade. Sex and the City fans may remember Charlotte being presented with flowers on a first date: ‘I knew it was going to be terrible’, she tells Carrie, ‘the man brought me carnations.’ Quite right. As for dyed carnations, let’s not even go there.

My very favourite dianthus is an older variety that is easily grown from seed. ‘Loveliness’, sometimes called ‘Rainbow Loveliness’. It’s a hybrid raised by Allwood in the 1920s, one he considered ‘perhaps the most fragrant of all flowers’. I think that's true. I have a pot of them outside our back door and the sweet scent when I open that door in the mornings is almost overwhelming. A short-lived perennial that can easily be used as an annual, 'Loveliness' grows 12-14” high, and is supposedly hardy down to zone 3 (although this is not something I've tested). From a late winter sowing, it will flower from June until October.

‘Loveliness’ produces delicate and deeply fringed flowers in pastel colours, lilac and rose and white and bicolours, all with that gorgeous scent which is most pronounced in the evenings. It looks like a flower having a bad hair day, and children love it: great for twirling and nose tickling. It does like to loll about a bit, so may not suit the gardener who likes all things neat and tidy, but it is so much lighter and dainter than the old dianthus that it remains a companionable plant in a mixed border. And I have found that confined to a pot it becomes surprisingly strong and stands up well. Like all dianthus, it prefers sun and well-drained soil, is drought tolerant, attracts pollinators and will gently self-seed.

It makes a great cut flower too, lasting many days in the vase. Add just a few stems to a mixed bouquet and everyone will be trying to work out which flower is producing the wonderful scent.

It’s also the ideal flower to use in a floating candle centerpiece. Check out how to make that here.

In the past, I have bought my seed from Chiltern Seeds in the UK; they deliver to Canada and you currently get 260 seeds for a couple of pounds. In the USA, try Baker Creek Heirloom seeds, where you get 200 seeds for three dollars. In Canada, it is available from Heritage Harvest Seed, where you get 25 seeds for four dollars. I make the point about cost because I am mildly irritated by the ridiculous price of seeds here in Canada.

Sow seeds in late winter or early spring: this year, I sowed mine on 11 January. Dianthus doesn’t like too much heat, around 15°C is fine. Sprinkle on top of a pot of moist sterile seed compost and don’t cover: they need light to germinate. Water from below and keep moist but not wet until they germinate. Mine started germinating a few days after sowing. They were all up a week later and put in an unheated room under grow lights. I planted them out in late March. Even quite small plants can tolerate light frosts.

They are sun lovers and must have a well-drained site although ‘Loveliness’ is a bit more tolerant of moist soil than most dianthus. And they aren’t so keen on acid soil. In fact, as Vita Sackville West observed when planting dianthus at Sissinghurst,’ if you can plant them with a generous supply of mortar rubble, they will be happy as the years are long’.

Once (if) summer really heats up, dianthus may stop flowering and this is a good time to shear them back by a good third, so that they will flower again in the autumn once cooler weather returns.