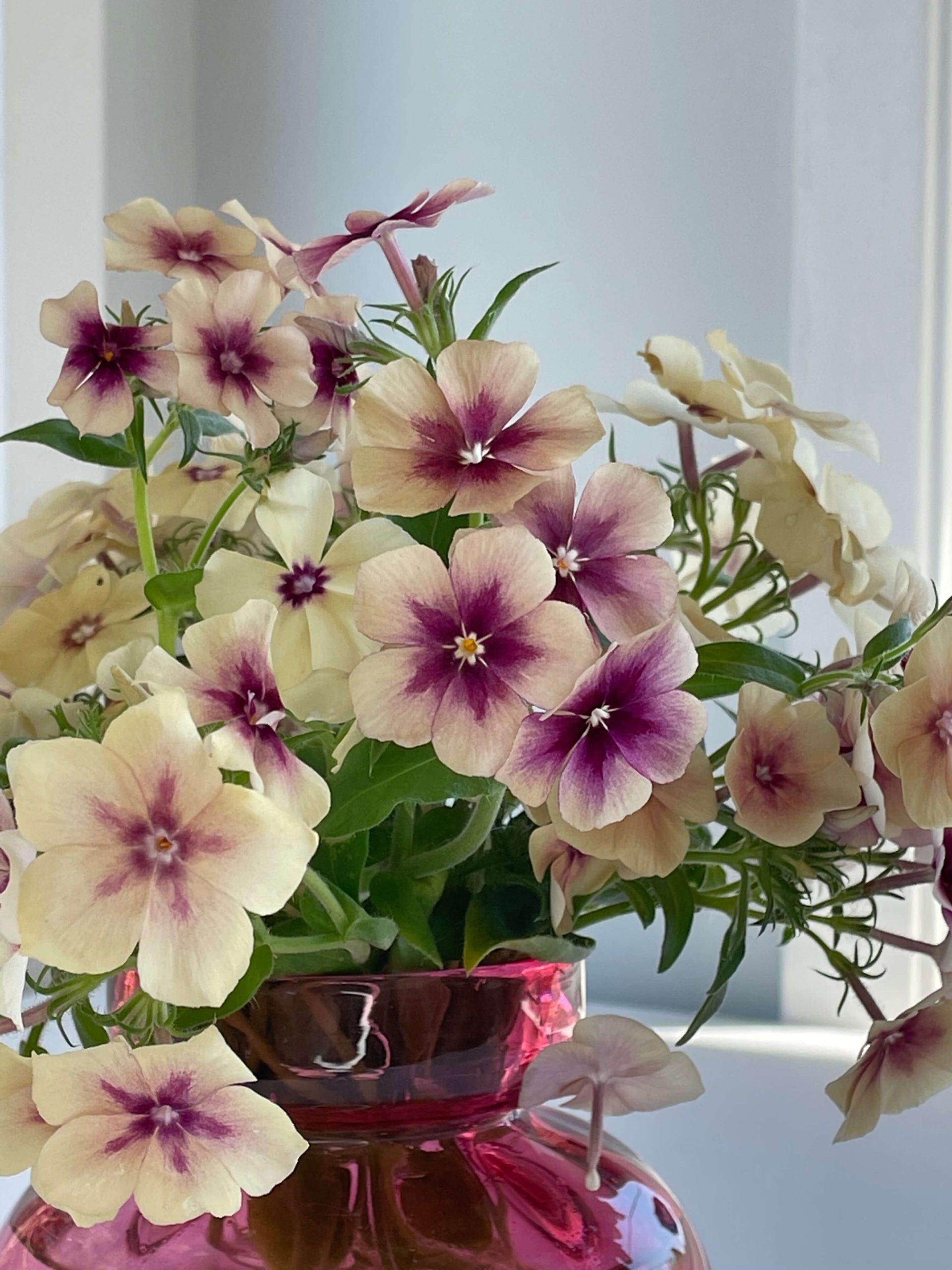 If, like me, you are easily tempted when it comes to flowers, then you probably succumbed to all the hype and bought seeds to grow Phlox 'Cherry Caramel' this year. The good news is the hype was justified - well, mostly. This annual phlox is one of the prettiest flowers I've grown in a long time.

Phlox drummondii is a native of Texas but has naturalised throughout the southeastern US. The varieties we grow today owe their origin to nineteenth-century Scottish botanist Thomas Drummond, who collected seeds and sent them back to Britain where they began to be hybridised. Score one more for the Scots.

I've often grown the dainty 'Moody Blues' and 'Lavender Beauty', which are shorter varieties that are amazingly floriferous and super in containers, but this year I also tried the much-vaunted 'Cherry Caramel' and two of the other taller varieties that are so much better for cut flowers: 'Crème Brûlée' and 'Isabellina'.

'Isabellina', an heirloom from the 1880s, is the most elegant of the three, a lovely very pale yellow that I've seen variously described as 'moonlight' or, more prosaically, 'condensed milk'. It grows 15-30 inches tall, and looks good against a dark leaf heuchera I have nearby. It would be a great choice for a night garden.

'Crème Brûlée' is the most vigorous grower of the three. It will easily get up to 30 inches high and produces masses of creamy flowers with varying degrees of streaking.

'Cherry Caramel', with its creamy petals and deep pinky red centres, has the most old-fashioned pretty flowers. The colour saturation varies and in a posy they create a lovely tapestry like effect. I didn't find they produced as many flowers as the other two, but those they did were choice.

All three phlox are supposed to be lightly scented, with fragrances described variously as melon, lilac and candy. I'm afraid I couldn't smell a thing. That was one minor disappointment, but the fault may lie in my nose.

More importantly these annual phlox need careful placement in the garden. The big problem, and this is surely why you rarely see the taller Phlox drummondii in garden centres, is that they have an exceedingly odd growth habit. Young plants start out straight, but then flop over and start to sprawl around. This, I assume, is what seed catalogues euphemistically describe as their 'branching habit'. It's their adolescent stage, and it's not a pretty sight. At the beginning of the season I wondered if I should just pull them out. I'm so glad I didn't. Gradually each stem starts to send out shoots that go up again, and it is these elongated shoots - and there are many of them - that are so prized for cut flowers.

But they need support to go up. Flower farmers usually stake them, but in the garden that would be too much of a faff, not to mention looking pretty awful. So the trick to making them a good garden plant is to grow them in amongst other flowers that can help disguise the sprawling stage and are sturdy enough to provide the shoots off each main stem of the phlox with support when they start to move upwards. So, for example, I had 'Crème Brûlée' in the same bed as some Cosmos 'Apricot Lemonade', and while the overall effect was decidedly uninspired in terms of colour combination, the cosmos provided a structure for the shooting stems of the phlox and their flowers gradually moved up to the level of the cosmos flowers.

If I was going to grow 'Crème Brûlée' again (and I'm not sure about this one), I would try a companion that might liven it up a little. I stuck a stem in an Agastache 'Kudos Coral', which brought out the pink centre streaks, and I liked that combination far more. (This is a gorgeous Agastache, by the way, with a delicious smell half honey, half mint.)

With 'Cherry Caramel' I was luckier in terms of colour. I'd planted Cosmos 'Rosetta' and 'Fuzzy Click' and Salvia 'Raspberry Royale' to contrast with some chocolate cosmos and help hold up Scabious 'Black Knight'. 'Cherry Caramel' looked good winding its stems in and up all the other plants. Together, they also made quite an effective combination for the vase.

All three phlox are brilliant cut flowers, with a long vase life. Cut when the first few flowers are open, and the rest of the buds will follow. And for those who live in deer territory, you'll be pleased to hear they have little taste for annual phlox (at least the deer in our neighbourhood). One fawn took a mouthful of 'Moody Blues' that I'd put in my deer sampler plate and literally spat it out. I'm impressed enough by these taller annual phlox that next year I may just grit my teeth and try out one I've always resisted: 'Phlox of Sheep'. Erin at Floret Farm tantalisingly describes this as coming in 'sweet pastel shades including peach, pink, blush, vivid salmon, white and buttercream.' Buttercream - sounds irresistible, and apparently they 'carry a sweet, sugary fragrance.' I'm sold.

I followed the basic directions set out by Kokoro Garden and had great success. Sow 4-6 weeks before last frost. Use plug trays as phlox dislikes root disturbance. Germination requires complete darkness. I covered the seed lightly, put another seed tray on top to be doubly sure, and kept at about 18-20°C. Once they start germinating (5-10 days), get them into good light. They can be transplanted into the ground after the last frost when the first true leaves (not the seed leaves) appear. They like sun and rich soil, and have moderate water requirements.

Where to buy seeds

Seeds are quite widely listed, but often out of stock.

In US, try Select Seeds.