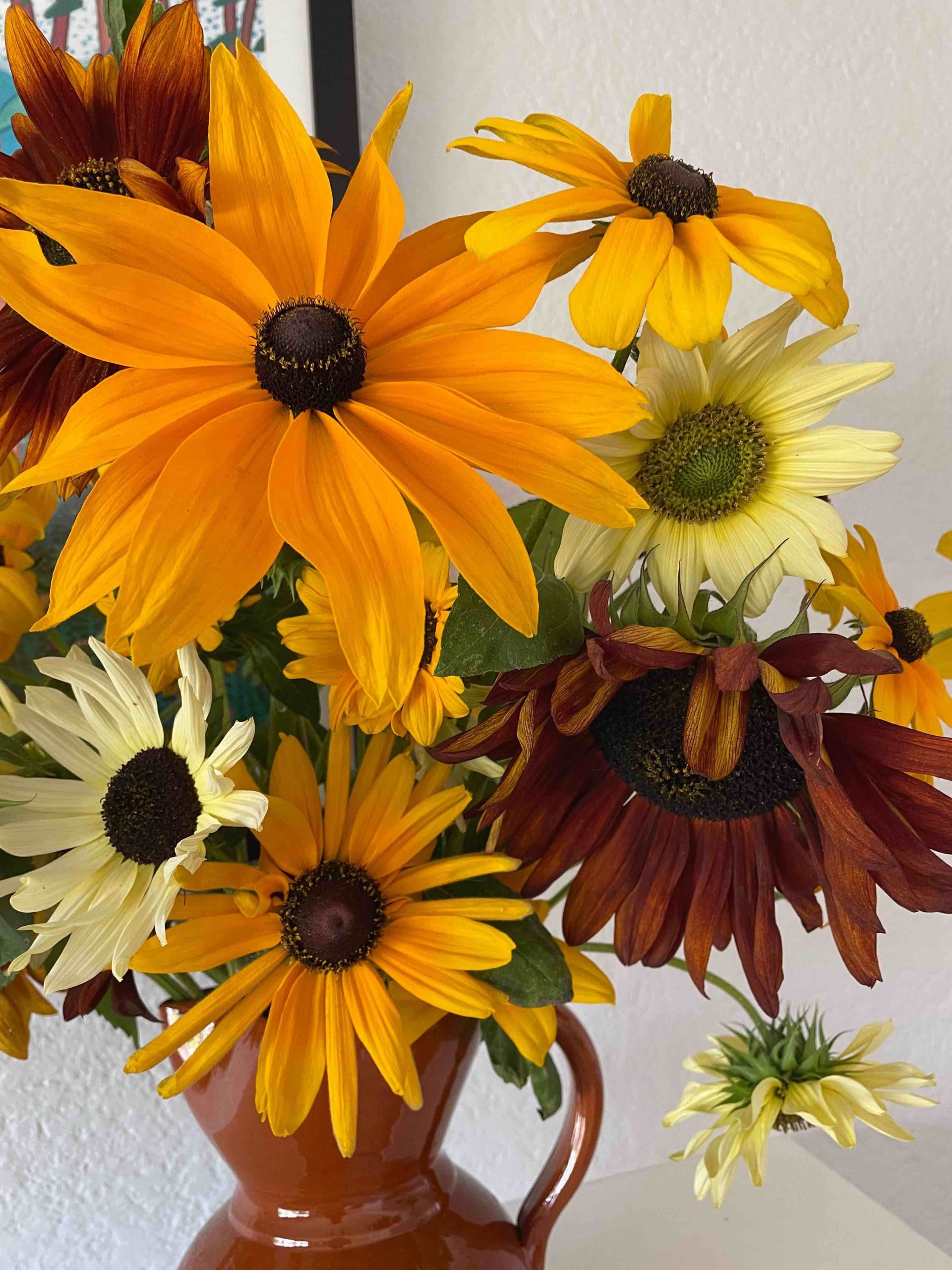 Looking around my garden, I can see almost nothing but daisy-like flowers. Slight exaggeration perhaps, but there is certainly a pronounced lack in variety of form. How did I manage that? The previous owners made this into a very spring/early summer-oriented garden so given that it is now late summer this is one thing I can’t blame on them. And since this is my first year here and I’m still learning about the garden, most of the flowers I’ve put in are annuals. This profusion of daisiness is all down to me.

I'm well aware that the best garden effects come from combining a variety of forms and textures. It’s just that I haven't applied my knowledge to my own garden. I think it’s down to a lack of planning.

Throughout my career, I was organised to the point of being an irritant to some of my colleagues. I drive my husband batty by reorganising his kitchen and his sock drawer. My vase collection is sorted by material and size. But I’ve never been very good at planning ahead for the garden. Sure, I love the idea of planning. I start endless files, with labels like ‘front bed left: blue and white’ or ‘woodland bed under cypress: pastels’ and for a week or so will diligently enter possible plants for the area. And then I forget the file, or suddenly find I’ve planted bright pink columbines in ‘front bed left’. It’s probably significant that I still have the much-longed for 5-year Toad garden diary my husband bought me for Christmas 2011 and that it is still empty.

All my best effects in the garden seem to come by accident. There’s the bed in which I have the most wonderful combination, all centering around a deep cranberry cosmos, which perfectly complements the scabious ‘Black Knight’ and chocolate cosmos, while phlox ‘Cherry Caramel’ picks up a similar red in its centre. If I say so myself, in terms of colour at least it was a huge success. But I don’t remember thinking it out.  The moment that planning entered the picture, it all went awry. I bought some delicious deep cranberry echinacea that I thought would look good with it. And it did, momentarily, until the flowers started to fade and turned an obnoxious pink. It was hurriedly dug up and now sits waiting in a pot alongside various other ill informed purchases. Occasionally it teases with a new flower in that delicious deep cranberry. I studiously ignore it.

But back to the question of daisiness. I suspect that, actually, I just like flowers with this particular form. Even my pots are dominated by daisies.

And in my defense, these daisy forms are as popular with the pollinators as they are with me. I haven’t grown dahlias very often, but I’m encouraged to try them again here because gardeners in Victoria are almost as crazy about dahlias as they are about rhododendrons. Looking through my old photos, though, I realise the ones I have preferred previously are not the monstrous dinner plate confections like ‘Café au Lait’, but, wouldn't you know it, the singles. These have the flat forms that offer easy access to - and therefore are more likely to attract - pollinators. Two photos from my previous Spanish garden show ‘Bishop of Llandaff’ and a much harassed and exhausted ‘Teesbrook Audrey’. Not sure which looks more tattered, Audrey or the butterfly.

Dahlias are members of the Asteraceae family, more commonly called the daisy or the aster family. One of the largest plant families, it includes such other plants as coreopsis, cosmos, echinacea, marigold, rudbeckia, sunflower, zinnia, and apparently nearly every other plant in my garden. They are particularly good for pollinators, and while appearing to be a single flower, a bloom in the Asteraceae family is actually a composite of many small flowers, each with their own reproductive parts: the flowers in the centre disc are called disc florets and the ones surrounding it are ray florets. Rings of new disc florets emerge, starting at the perimeter and moving to the centre, with the centre disc gradually becoming more cone-shaped as the seeds underneath develop. You can see the rings of disc florets around the perimeter of this cosmos ‘Apricot Lemonade’, and a side shot of an older flower shows how the centre disc is becoming cone-like to accommodate the growing seeds.

As well as being very attractive to pollinators, the daisy family make excellent cut flowers, and there's nothing like a glorious jug full of sunflowers and rudbeckia to cheer up a day.

This year I grew only a small variety of sunflowers. The smallest was 'Sonja', a very deep yellow, multi-branching, only about 2 foot tall, and with 3-4 inch flowers. Good for bouquets. My favourite was ‘Vanilla Ice’, a pale yellow with quite a small flower. I found it very sturdy in the garden too, and while the heavier heads of the taller ‘Velvet Queen’ meant the stalks need a lot of support, ‘Vanilla Ice’ made a strong self-supporting bush. I also like 'Valentine', another pale yellow. Both will be regulars in my garden now.

As for the rudbeckia, these were new to me, but I found all the varieties I tried very easy from seed. The colours are generally a bit strong for my taste in the garden, but I love them in a vase, so I may be keeping them in a dedicated cutting patch next year. Of all the ones I grew I like ‘Cheyenne Gold’ the best. It’s an absolute winner for bouquets and some of the flowers are massive. I was looking forward to seeing my Rudbeckia triloba, but it had such a set back as I dithered over where to plant it out that it's now sulking and taking its time to come into flower. Triloba is supposed to overwinter easily, so I look forward to using it in arrangements next year.