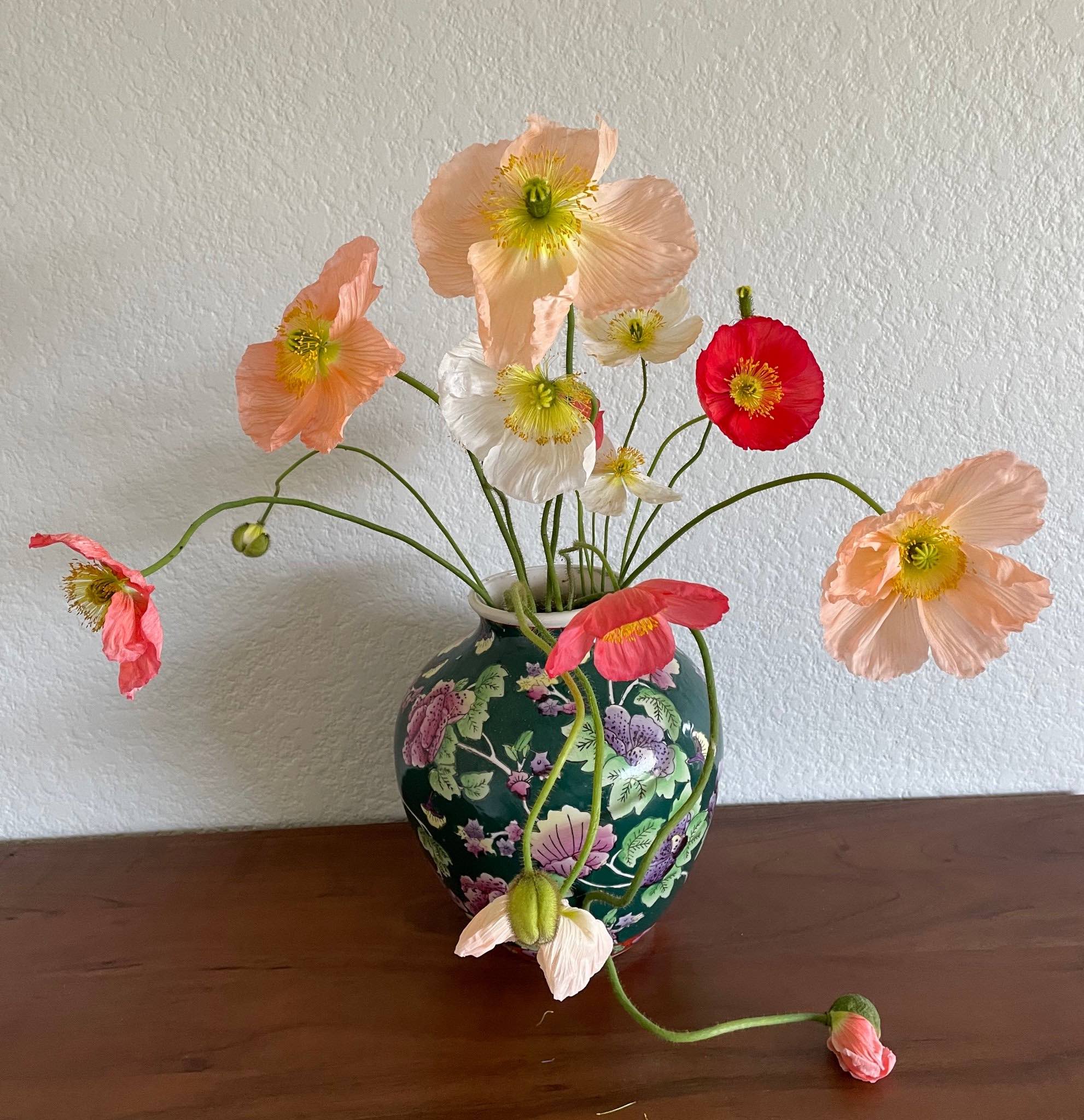 Posted by Glennis Byron on September 1, 2022

Wandering through the garden centre the other day, I noticed Iceland poppies were already in stock. As their name suggests, these poppies are very hardy and can survive down to zone 6: they can be planted out in autumn and will overwinter in the garden. Technically perennials, they're more likely to be dispatched by the heat of summer.

Unfortunately, the only variety I saw offered is Papaver nudicaule 'Garden Gnome' mixed. I did buy a few of these last year, and, as I suspected, 'mixed' translates as mainly yellow and orange with a possible red and a white, perhaps a pink if you're extra lucky. 'Garden Gnome' is, however, very popular and it must be said they are extremely floriferous, so that's fine as long as you want yellow and orange poppies, but I don't.

I also grew my own from seed last year so all was not lost. It wasn't anywhere near as difficult as I had imagined. Not the easiest, but certainly worth doing if you're up for a little challenge. The advantage of growing your own from seed is not just that you'll be able to grow the colours you want, but that you'll also be able to grow the bigger and stronger varieties which make such fabulous cut flowers with their beautiful crinkly flouncy petals reminiscent of crushed tissue paper. And they have a lovely light citrus scent and will last longer, both in the garden and in the vase. It's the first day of September, and my seed sown Iceland poppies are still producing a few new flowers. I grew a few different varieties and the only one I wouldn't bother with again is Papaver nudicaule 'Wind Song'. Sold as a soft romantic mix of huge-headed poppies, I got the smallest heads of any I grew in a mix of, you guessed it, orange and yellow.

The most easily available special variety is the Champagne Bubbles series, but don't go for the mix unless, again, you want you know what. These have large flowers and grow 18-24" tall and 8-12" wide. In the UK, try Chiltern seeds; in the US and Canada, Johnny's seeds. Also in Canada, Stems Flower Farm, which has a really impressive range of flower seeds (do check them out) will be stocking individual colours of Champagne Bubbles as of 24 October 2022.

An alternate to Champagne Bubbles is Floret Farm's luscious looking Sherbert Mix. Yes, a mix, but a good mix. I think Floret's Erin Benzakein could sell me the proverbial swamp in Florida. Of this mix she says it is 'one of the most exquisite cut flowers we’ve ever grown, this blend of apricot, watermelon pink and pure white will leave you breathless.' Act quickly if you want them. Floret's autumn seed sale starts 7 September 2022, and I, along with all the other fans of Floret, will be poised at the keyboard, fingers at the ready, waiting for the online shop to open. Floret delivers to both US and Canada.

But the most special variety of all - the monstrous but most beautiful queen of Iceland poppies - is the Colibri. They really do have enormous flowers and far longer and thicker stems than Champagne Bubbles. The petals are delicate, sometimes double and ruffled as they open. Just stunning.

The stems are so long that in the vase they sometimes twist around a lot, leading to some interesting effects. If you look at the main image of the poppies in a vase again, it's easy to see which are Colibri and which are Champagne Bubbles just by the difference in size of flower and stem.

For a change, Canadians score: it's very easy for the ordinary gardener to get these seeds here, although they definitely aren't cheap (100 seeds for 18 CAD, ouch). Unicorn seeds offers individual colours or, my preference, the La Dolce Vita mix, which gives you primarily pale pink, apricot and white, with 10% red and yellow added. As for the rest of the world, as far as I know the seeds are only available to commercial growers. But if you can get the Colibri, it's really worth it. Even the buds are wonderful.

Use small cell trays and fill with a moistened sterile seed mix. Alternately, use coir plant plugs. Spray with water then put 2 or 3 seeds into each cell (they are very small and some people like to use the end of a moistened toothpick but I haven't bothered with that). Surface sow, don't exclude light.

Place them on a heating mat set at 21C. Cover with a humidity dome. They should start germinating in 5-7 days. Take off the dome, and keep in cooler bright conditions. An unheated but frost free greenhouse would be ideal. Water only from the bottom to avoid damping off. Give them a weak solution of fish emulsion when they have their first true leaves. Plant out in spring after last hard frost in a sunny spot. Space about 9" apart. As soon as they are planted out, they'll be off.

If that all sounds like far too much of a faff, then you could try sowing the seeds directly outside in the late autumn. The best time to sow is 6-8 weeks before your first frost. I'm trying it this year with one row, but I don't think I'll risk it my expensive Colibri seedlings becoming dinner for the slugs. Just don't cover the seeds: they need light to germinate. If you're in zone 6 or higher and you sow in the middle of winter they should still work. When the temperature is right for germination, they will pop up. Main trouble with this is distinguishing them from the weeds, so make sure you know what an Iceland poppy seedling looks like (see left).

Pick Iceland poppies when the bud starts to crack. I dip the bottom one inch of the stem in just boiled water for 7 seconds and I find that they will then last a good week. They look lovely just by themselves in a vase, or you can combine them in a mixed bouquet. If you are giving the bouquet away, remember to point out that the stems of the poppies should not be re-cut - people rightly usually re-cut when they get a bunch of flowers - but they need to know the poppies have been treated and the seared end shouldn't be cut off.