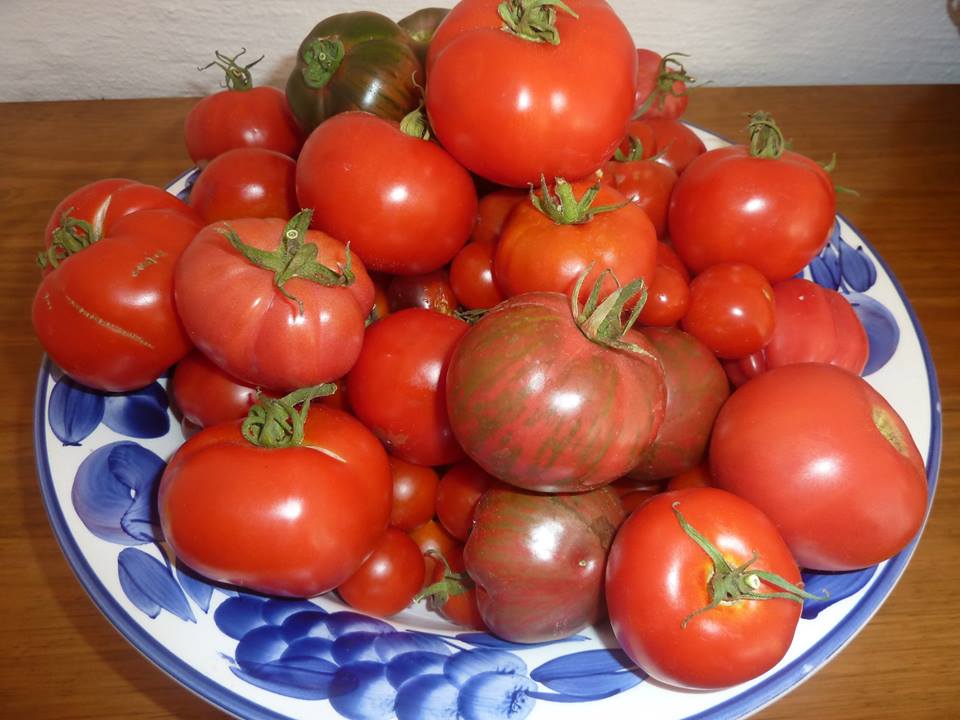 What to do with a glut of tomatoes

'Knowledge is knowing a tomato is a fruit; wisdom is not putting it in a fruit salad'

Although I’m really just a flower person, I do venture outside my comfort zone sometimes. And while I’m not much good at growing vegetables or fruit, I do enjoy growing tomatoes because it gives me the ability to experiment with varieties you can't usually buy.

I didn't grow many this first year in our new garden. But now it’s August and there’s lots on sale so I’ve added some from the shops to those I’ve harvested to make this intensely concentrated sauce that I freeze for my husband to use during the winter. (I fear I am not much good at cooking either, but I can just about handle this.) It makes a great replacement for canned tomatoes in casseroles and curries, and an excellent base for pasta sauces.

• Roughly chop a selection of different tomatoes - cherry tomatoes just need to be halved. Place them in a large ovenproof bowl with a large peeled onion and 6 cloves of garlic, chopped. We’ve just discovered the fabulous Russian Red, so if you are using something that big and pungent, adjust accordingly. 6 cloves of Russian Red might be a mistake. Sometimes I remove the skins from the big tomatoes, sometimes I don’t bother, but I certainly always leave them on the cherry varieties.

• Add salt to taste, a generous amount of ground pepper and drizzle with a decent extra virgin olive oil.

• Place in oven at 200°F and slow cook until it is reduced to a quarter or less of the original volume. This will take a long time, very likely all day. Stir occasionally to avoid it burning but a little caramelizing will add to the flavour so stir in the dark bits. If it isn't reduced enough by the time you go to bed, turn off the oven and leave tomatoes in overnight. Turn the oven back on in the morning if needed. Once reduced enough, cool and put into containers for freezing.

Other uses for a glut of tomatoes…

• It is often said that tomatoes rubbed into the skin can soothe sunburn and lessen the redness.

• Hair turning green from too much time in the swimming pool? Some say that normal colour can be restored if you saturate your hair with tomato juice, cover with a shower cap, leave 10-15 minutes then wash and condition as normal. I haven't tested it...

• Awful smells? It is often claimed that tomato juice will remove the stink from a dog that's been sprayed by a skunk. This is a myth. Your now pink dog will smell like a rotting tomato.

• If you burn yourself in the kitchen, after you've run cool (not cold) water over the affected area for 5 minutes, put on some tomato slices. They are supposed to soothe, reduce inflammation, prevent blistering and promote healing.

• For glowing skin, mash up a juicy tomato with honey to make a paste, rub on your face. Relax for 15 minutes - best to avoid answering the door during this time - then wash off.